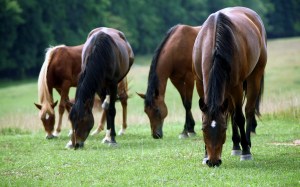 A year after fire ripped through the Valley View Acres stables killing dozens of beloved horses, a new barn has risen from the ashes and new horses are filling the stalls.

“It was hard losing 32 of my best friends,” said Laura Kalivoda of Crystal Lake who has ridden horses at the stables near Woodstock Illinois since she was a child and today gives riding lessons there. “That was the worst thing that had ever happened in my life.”

As she recently stood in the new barn, her voice often drowned out by the neighs of feisty horses nearby, she recalled the pain in explaining to many young riders that their favorite horses had died.

That pain was compounded as she worked with students, some as young as 5, learn to ride the new horses.

It was emotional, she explained, because she often referred to a horse who had died as she’d help a student adapt to a new horse. There were moments when the child would pause and a somber look would wash across their face, as if reliving the moment they learned their horse had died.

But the year since has brought the horse community together and together all are ready to ride forward.

Kalivoda is just one of many from the horse community -locally and nationally- who rallied around owners, Amber and Tyson Bauman.

On a recent rainy, chili night, students were back in the new barn quietly brushing horses prepping them to go out into the brightly lit arena to practice their trots and jumps. Their parents gathered in the not quite finished viewing area. Mittens, the Barn’s 17-year-old cat, was once again welcoming the riders and their parents back to the barn.

In the weeks since the new horses moved in and lessons have commenced, Amber Bauman said there have been many firsts. The first jump. The first fall.

“We celebrate those things,” Bauman said as she watched students riding in the arena.

After the tragic fire, which the Baumans refer to as “the barn” many people, those familiar to them and strangers from across the country, raced to their rescue donating horses, tack and money to rebuild.

Bauman said there is much heartache that lingers, but says the time for tears is over.

The tragedy has taught her a lot about life and people.

“You find out who your real friends are,” she said. “There are a lot of wonderful people out there.”

She said many “angels” have logged hundreds of hours by her side laying radiant floor heating, insulation, and plumbing, staining wood, building horse jumps, digging trenches and shoveling gravel.

Their only payment – burgers, sodas and waters.

She said at times horses would just “show up” in her driveway or supplies would appear on her front porch.

Few students left. Many said the best way to deal with the tragedy was to stick together, do the work and to just keep riding.

“It’s family, you’ve got to stick together,” said Amber’s cousin Quentin Britton, as he watched his 11-year-old daughter Isabel riding in the arena. “Don’t let anything get in your way. You gotta rebuild. Keep going.”

Bauman, who also works as a substitute teacher and whose husband Tyson is deputy police chief in nearby Harvard, remained busy all year negotiating with insurance, finding new horses for her students to rid and teaching lessons six days a week in a rented facility in Crystal Lake.

Lessons were taught and riding and jumping competitions were won on the backs of donated horses that Bauman and her students had to work hard to break in.

Bauman said often times at various competitions people she’d never met, but who knew of her because of the fire, would approach her and they’d “hug and cry like you had known them your whole life.”

Her daughter Alexis, 12, has had opportunity to train with Charles Moorcroft, influential rider from Florida who became aware of the family after the fire. Without being solicited, he sent Alexis Sebastian, one of his prized horses, to practice on.

Alexis’ favorite pony Ella Enchanted died in the fire. Today, she has a new favorite, Just Juliet, whom as she writes on a piece of paper hanging outside her stall “just is a pretty one.”

Juliet is a full sister to Hunter, a beloved pony who had died in the fire. Bauman said she “just wanted her” and a Go Fund Me account paid for her to be brought to the barn from Pennsylvania.

Authorities have deemed the fire that leveled the 150-year-old barn as “undetermined.”

The new stables and arena cost $260,000. The facility is equipped with heated stalls that include automatic waterers. The building has been constructed with fireproof materials, sprinkler system, smoke and fire detectors. Each stall has its own exterior door and hay is kept in a separate building away from the horses.

“You go through one tragedy, you think of everything,” said Amber’s father Paul Allen.

Bauman said she received just $5,000 from insurance for loss of business. The horses were not covered by insurance. She has had to take out a $109,000 loan to help with the costs to rebuild. But it’s still not enough.

“We don’t know exactly what caused it,” Olsen said.

He said though there is no way of knowing for sure what caused this fire, possible reasons for such barn fires could be related to an electrical malfunction or faulty heating equipment. One thing he knows for sure is the fire was not purposely set by anyone.

He also said, though it varies in different areas and is a case by case scenario, in McHenry County there are no requirements for sprinkler systems or fire alarms in this agriculture type of building. He also said there is no requirement for Bauman’s business to be regularly monitored or inspected by authorities.

Jennifer Austin, mom of 13-year-old Anna, who lost a favorite horse, London, in the fire said being back in the new arena is “Great.”

“It’s just light and bright and cheerful and the horses seem happy… It’s just gorgeous,” she said as her daughter readied for her lesson.

Austin said her daughter who takes lessons weekly was upset by the loss but her best remedy was to continue riding.

“Carry on,” Austin said. “You work hard and don’t give up and continue to make your dreams come true.”

Bauman said there are no tears anymore. “It’s time to move forward,” she said.
There is more work to be done, lessons to be given and competitions to be won.

Now a year after suffering the loss of 32 ”family members,” she said she looks to the future and anticipates “being super successful in the show ring locally and nationally” and “Honestly, just enjoying the ride on this roller coaster called life.”